This exhibition will display a series of original documents concerning aspects of the 1916 Rising which are held in UCD Archives. The exhibition includes a copy of a ‘Half-Proclamation’ printed by British troops who occupied Liberty Hall in April 1916 (on view 5 February only) printed by British troops who occupied Liberty Hall in April 1916; the Diary of civil servant, J.R. Clarke, who gives a firsthand account of his experiences during Easter Week 1916; Ernie O’Malley’s interview with Liam Manahan concerning his involvement in the Rising; Eoin MacNeill’s countermanding order to Éamon de Valera and his general countermanding order to the Irish Volunteers; photographs of the aftermath of the Rising; and material from a file of intelligence documents mainly concerning General Sir John Maxwell, General Officer Commanding the Forces in Ireland.

UCD Archives specialises in the acquisition of private paper collections associated with the history and development of the modern Irish state. It now preserves the papers of a great many Irish public figures including members of government and the judiciary, presidents and European Union Commissioners. These are complemented by the papers of members and former members of college staff, many of whom have served in high public office. 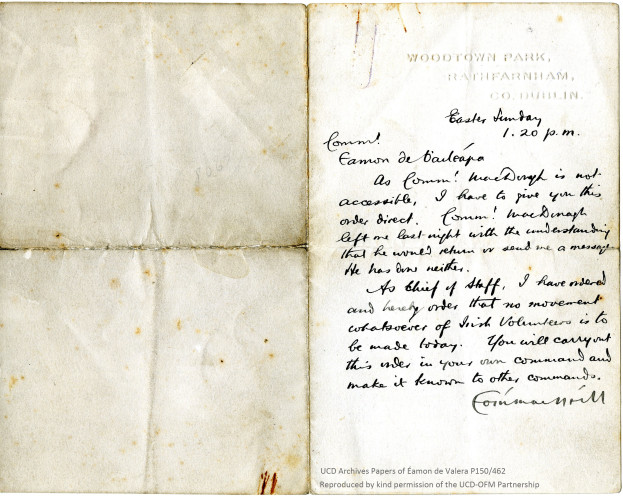