Kevin Barry and His Time: An Exhibition

An exhibition highlighting the Life and Times of Kevin Barry

UCD Library has digitised two wonderful and evocative collections, honouring one of Irish history’s young heroes. Kevin Barry, a medical student at UCD, was executed for his part in an ambush which resulted in the deaths of three British Army officers in 1920. He was hanged on the 1st of November 1920, despite numerous appeals for his life to be spared. He was 18 years old.

The digitisation project was launched recently by UCD President, Prof Andrew J Deeks and an exhibition highlighting the Life and Times of Kevin Barry will be on display in the public foyer outside the James Joyce Library on UCD’s Belfield Campus from Monday, 16 to Friday, 27 November 2015.

The Kevin Barry Papers, held in UCD Archives, contain material associated with his days at Belvedere College, his year as a medical student in UCD, and his brief time in custody at Mountjoy Prison before execution. The majority of the collection is composed of material gathered by Kathy Barry Maloney, Barry’s sister, after his death.

The Papers of the Kevin Barry Memorial Committee, recently purchased by the UCD Students’ Centre and held in UCD Archives, comprise the papers and correspondence of the Kevin Barry Memorial Committee, which was formed to raise funds to create a memorial to Kevin Barry. The Committee commissioned Harry Clarke Stained Glass Limited to create a stained glass window dedicated to Kevin Barry. The window, designed by Richard King, was erected in Earlsfort Terrace and unveiled on 1 November 1934. In 2010, the window was conserved, restored and relocated in the Charles Institute at UCD.

The digital collection is freely available to all at digital.ucd.ie 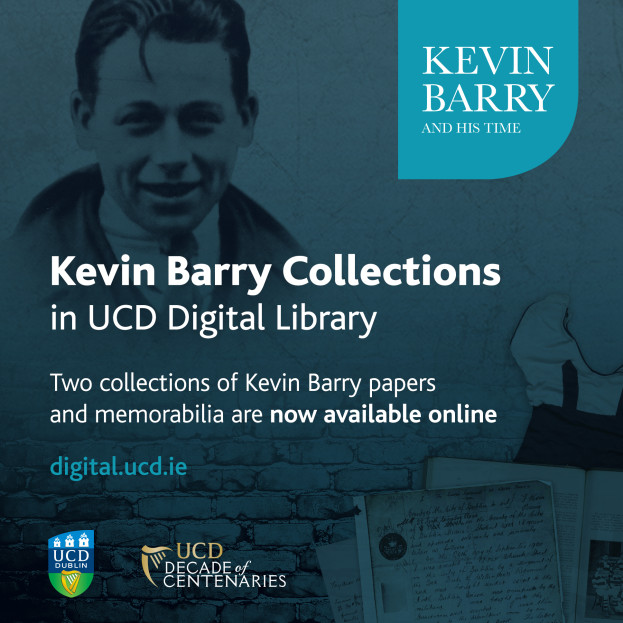 Section of Kevin Barry and His Time exhibition panel