Art of the Troubles: Culture, Conflict and Commemoration

This conference was a collaboration between the UCD Institute for British-Irish Studies (IBIS) and the Ulster Museum to complement the 'Art of the Troubles' exhibition.

This conference was a collaboration between the UCD Institute for British-Irish Studies (IBIS) and the Ulster Museum to complement the ‘Art of the Troubles’ exhibition on show at the museum.

It explored the role of art and artistic interventions in reshaping social relations in Northern Ireland. Conflict and division within Northern Ireland has often been seen to relate to differing modes of belonging: Clashes occur at many levels, from the level of elite political leadership to everyday interactions surrounding visions of legitimacy and constitutional rights, perceptions of historic grievance and images of what constitutes communal allegiance. The recent talks process (chaired by the American diplomat, Dr Richard Haass) aimed at devising a policy framework for moving beyond these clashes ended in relative failure.

Haass proposed that a new ‘civic vision’ should take the place of these divergent perceptions and the conference took as its point of departure the role that art plays in troubling received imageries, undercutting political tendencies towards polarisation, and providing a fresh lens through which to envisage change. 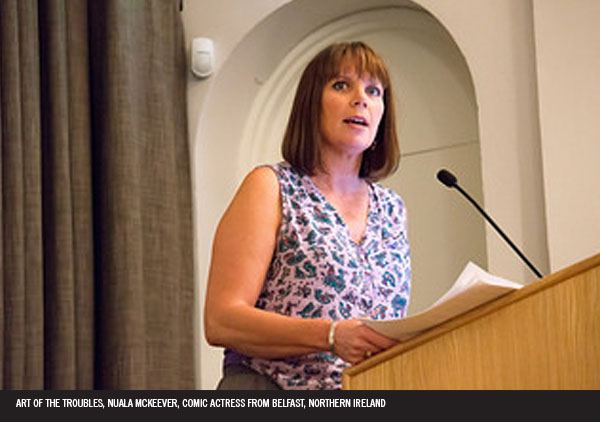